A subprocess is a process that runs together with a regular process. When creating a transition in the designer, you can specify whether it starts or finishes a subprocess. 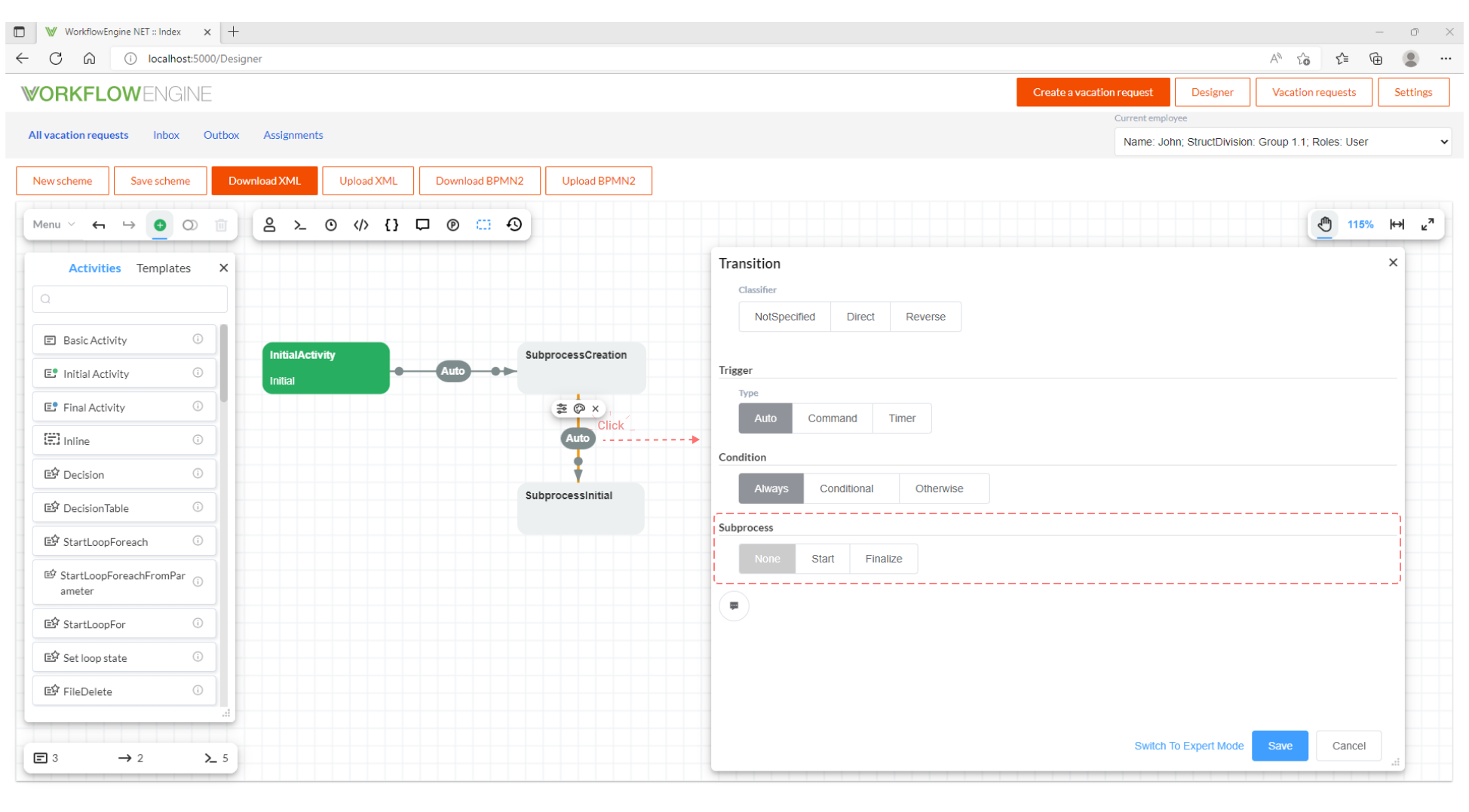 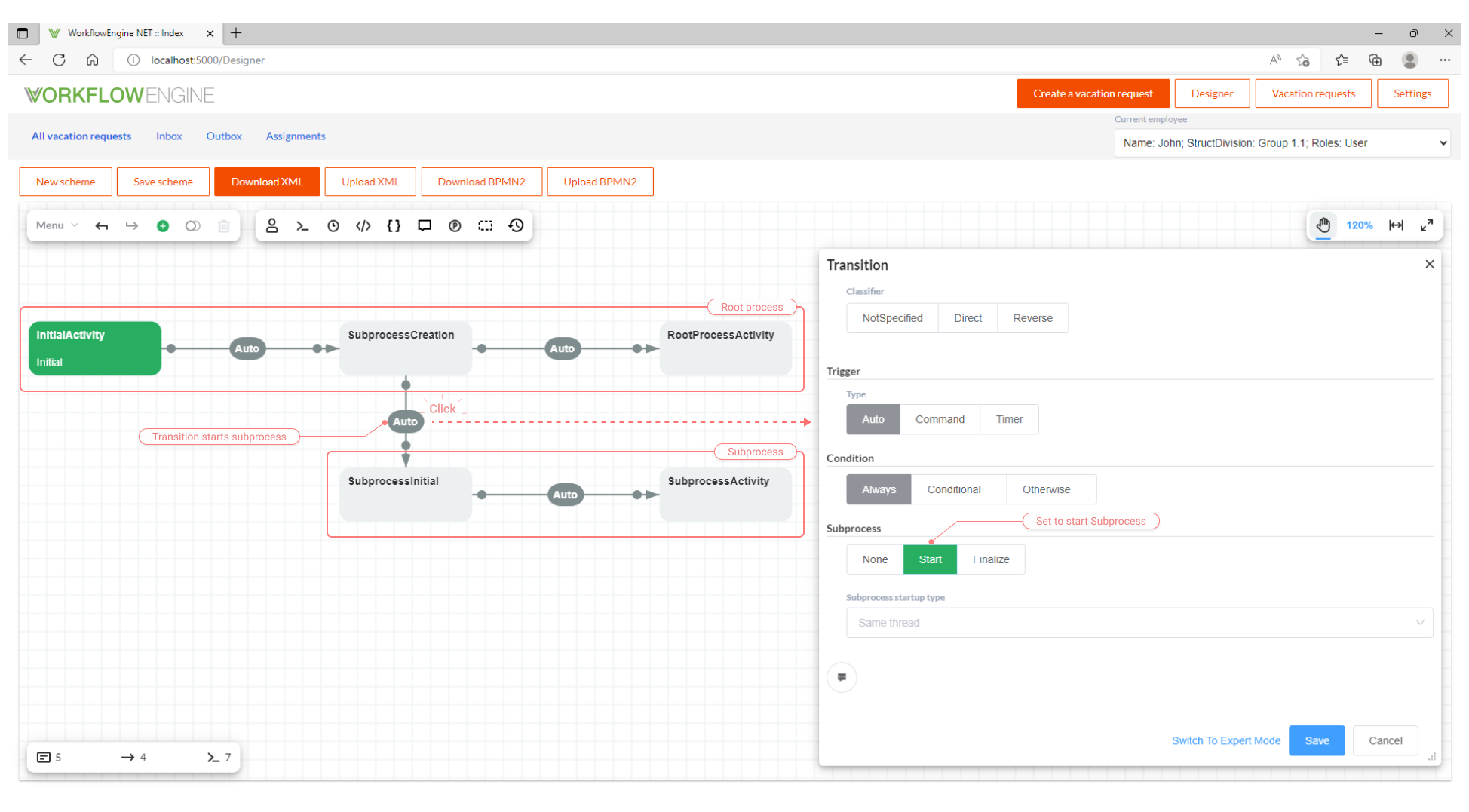 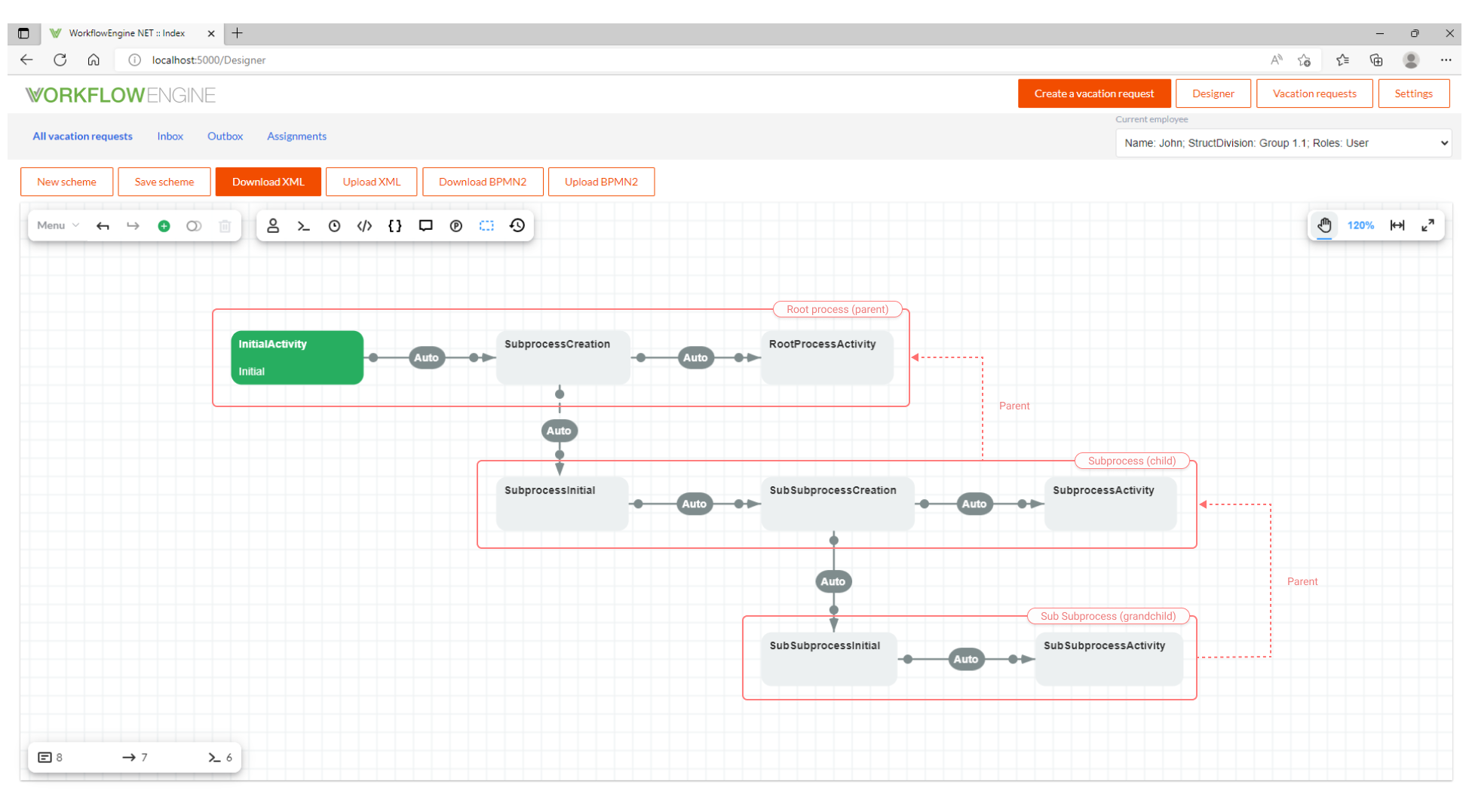 The hierarchy of subprocesses is a tree. 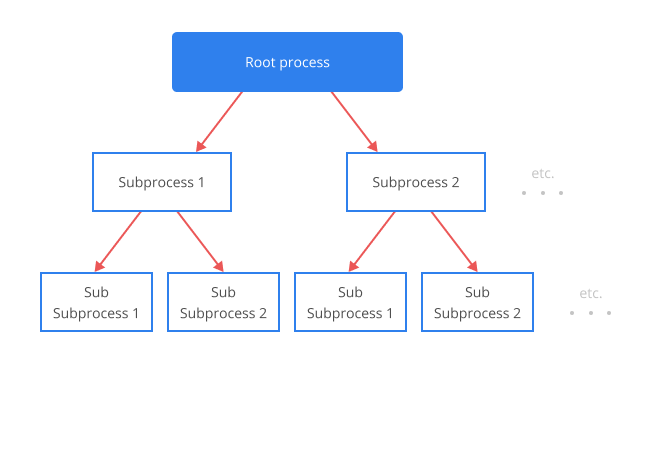 First of all, let us define two terms related to the hierarchy of subprocesses to be used further:

Subprocesses can be used in many cases. For example:

As noted earlier, a subprocess is started by a transition with the corresponding specification. First of all, you should pay attention to the additional launch settings in the default mode and in the expert mode: 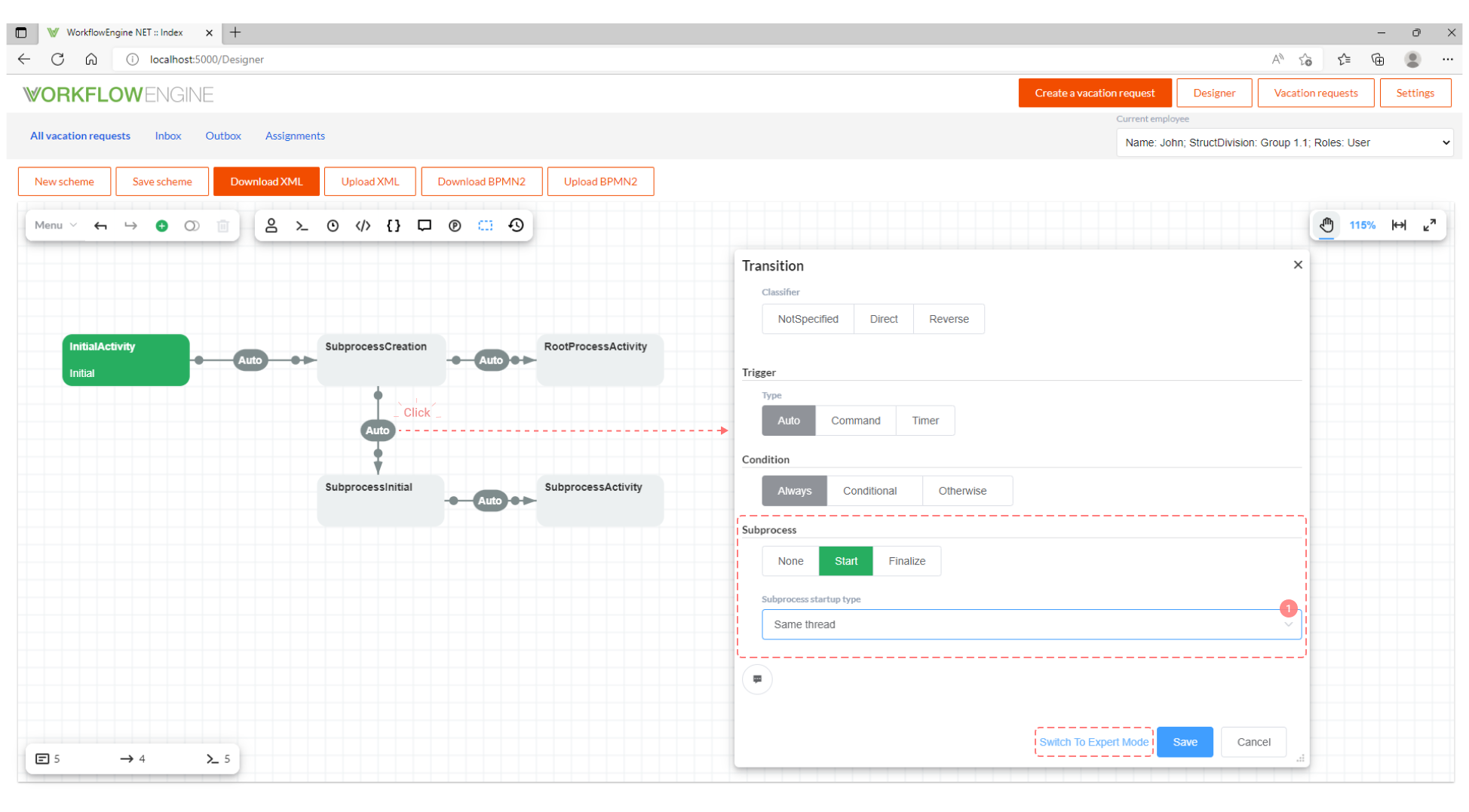 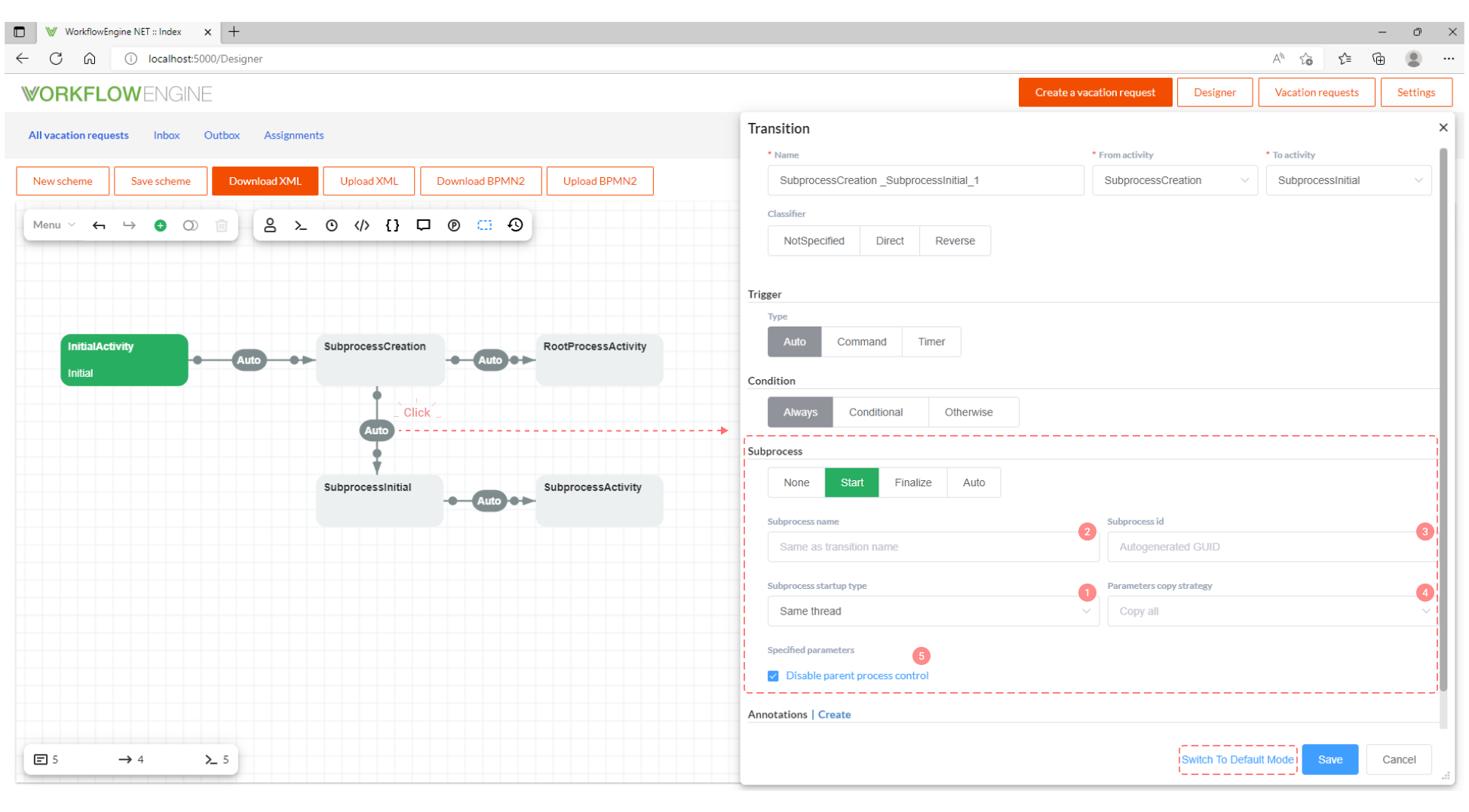 You should also take note that a transition able to start a subprocess has a choice of triggers (commands and timers) and conditions to perform the transit; therefore, you can create a subprocess by command, by timer and by setting the conditions for creation. 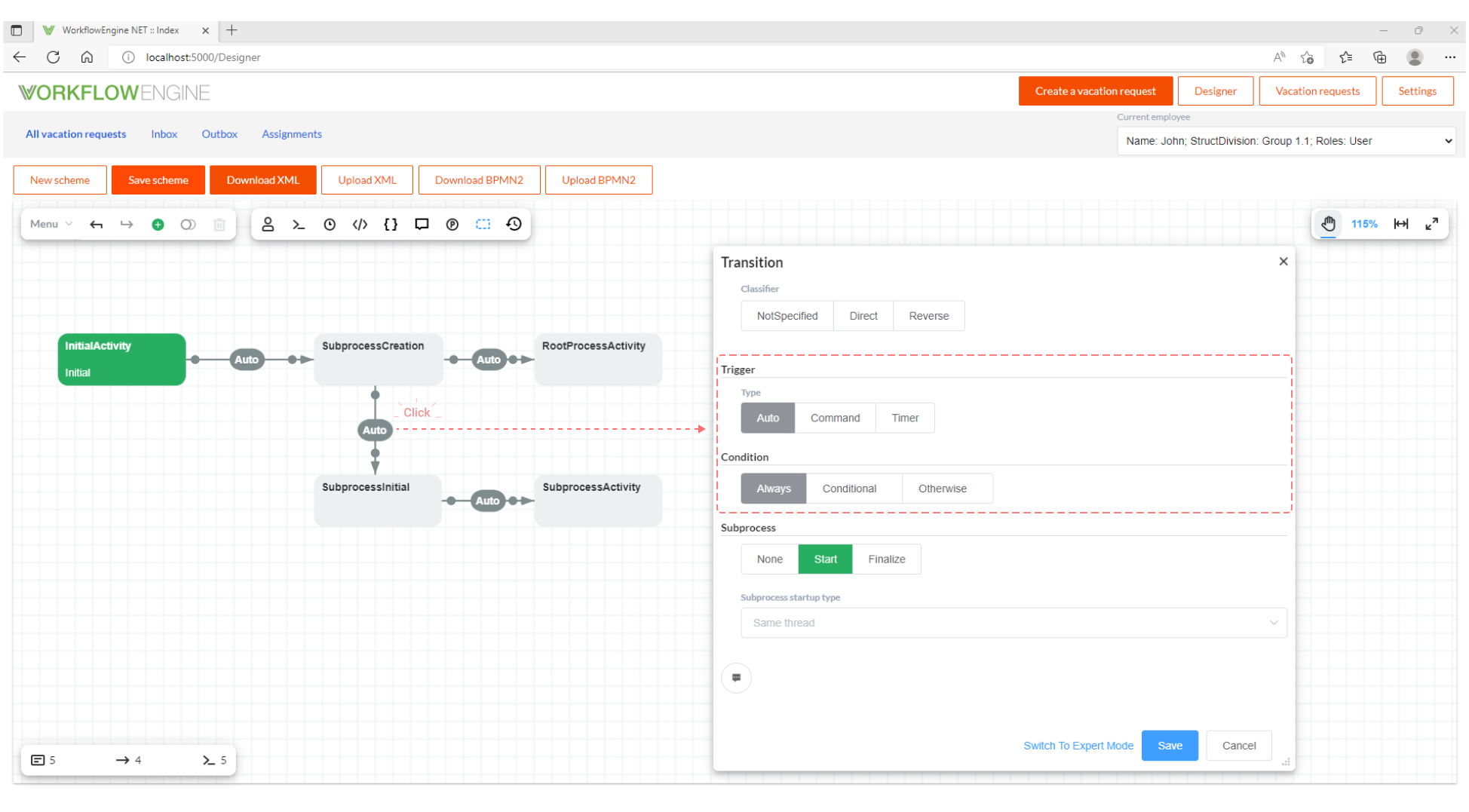 Let us consider the settings to start a subprocess:

As already mentioned above, a subprocess can be created by a transition with Auto, Command or Timer triggers; moreover, this transition can be conditional. Let us summarize how everything works: 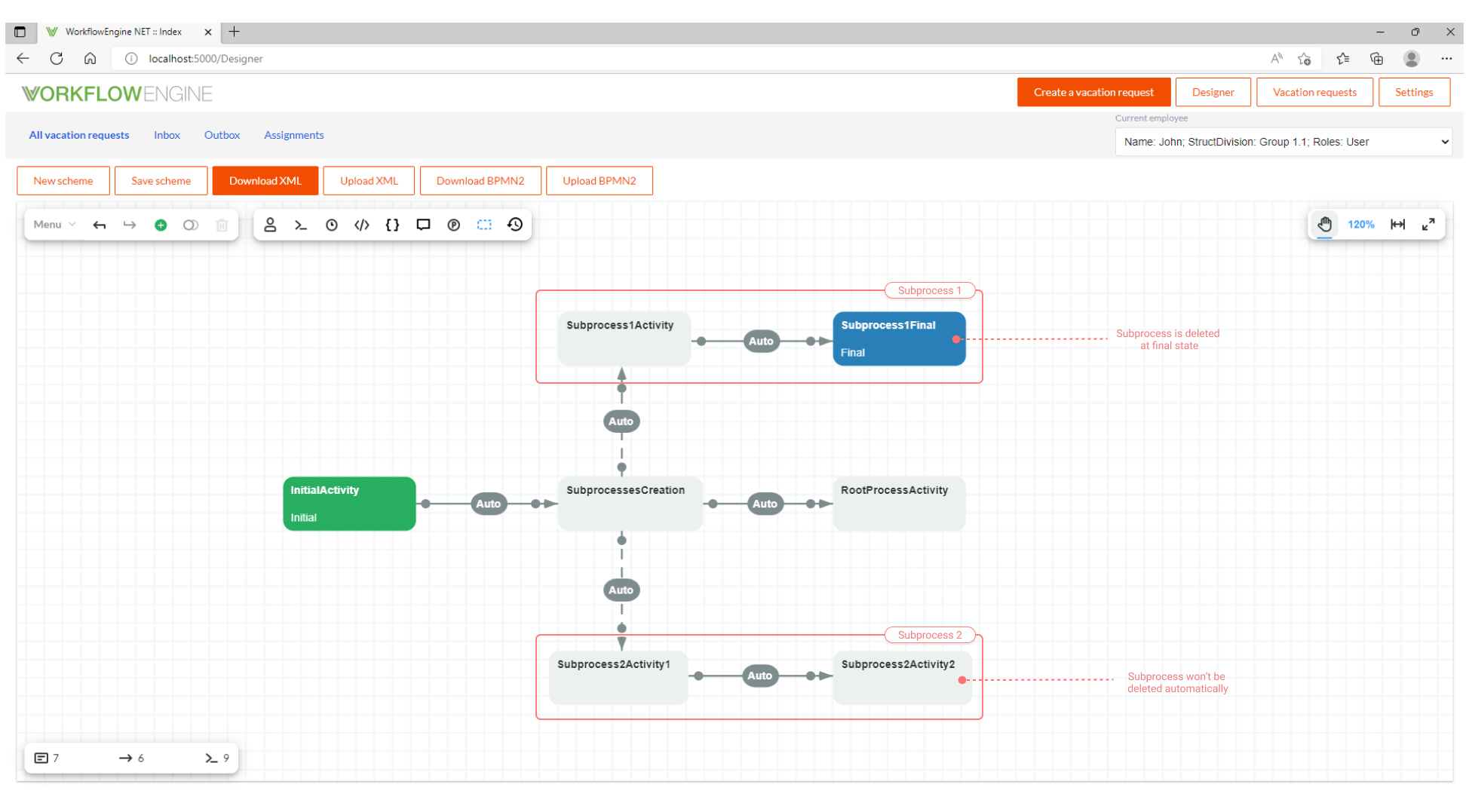 The subprocess can be also merged into the parent. In this case, the subprocess behavior is determined by the output transition. Here are the available settings. 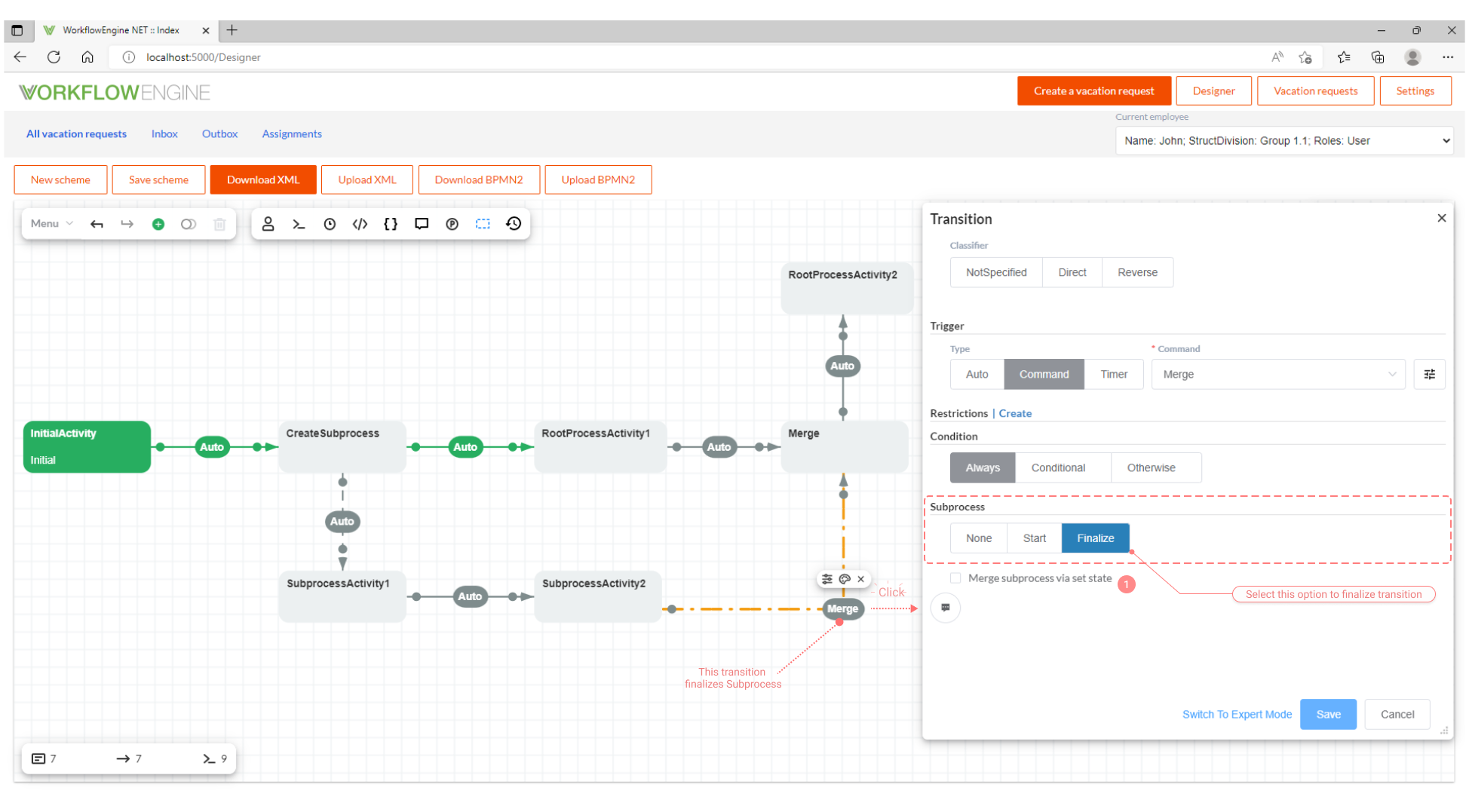 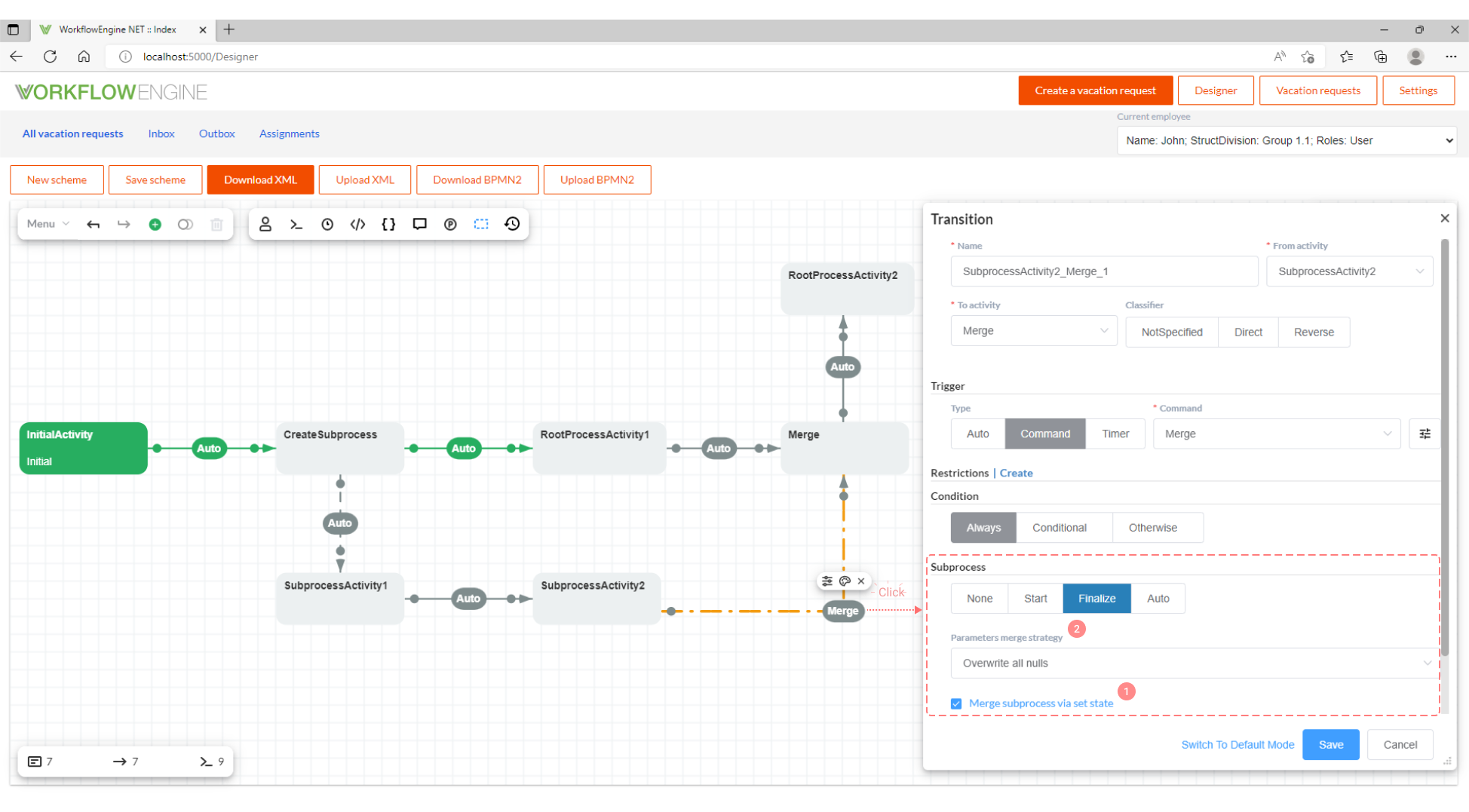 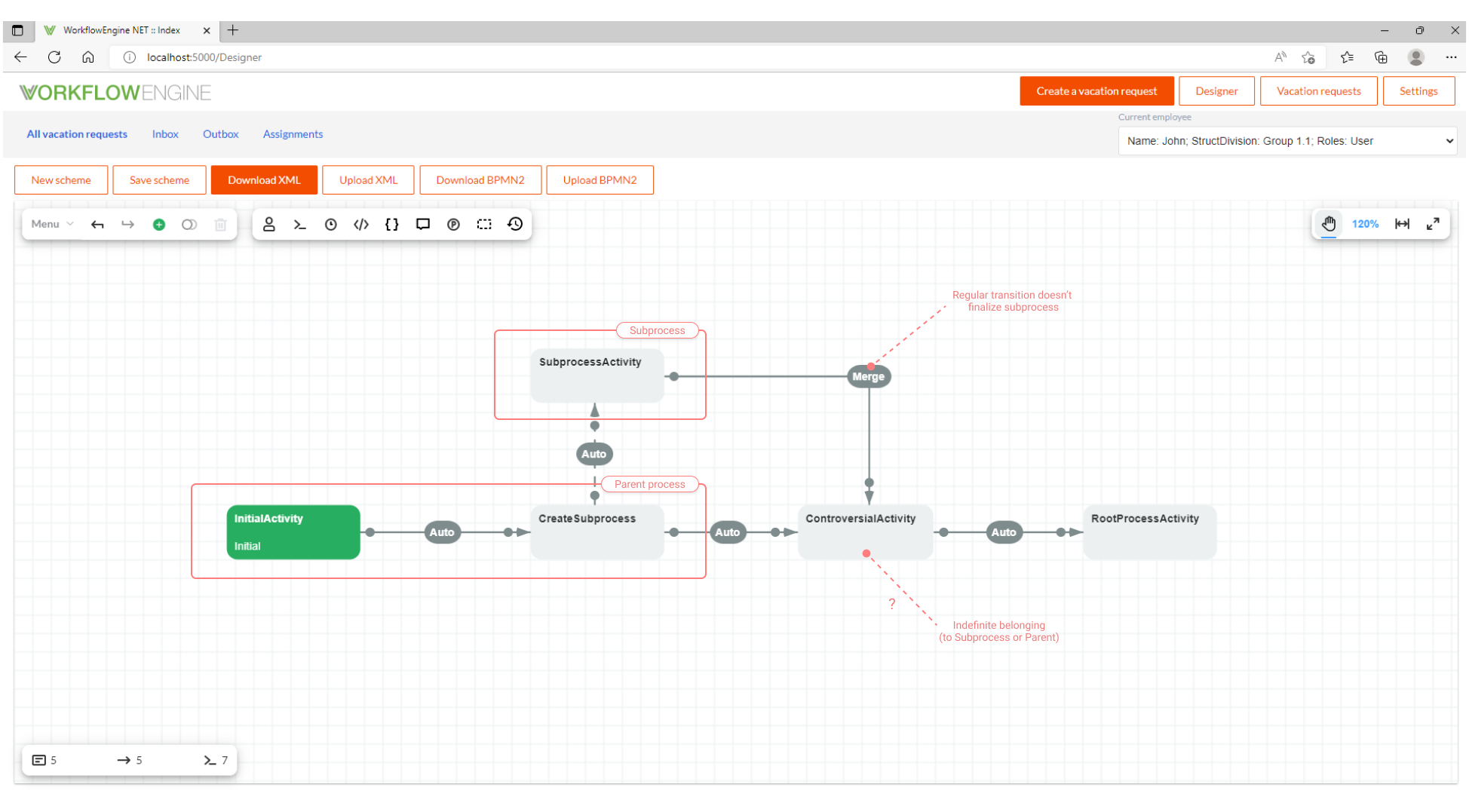 Therefore, it is very important to correctly label the transitions that start and finalize subprocesses. With the correct marking, even the following case becomes possible: 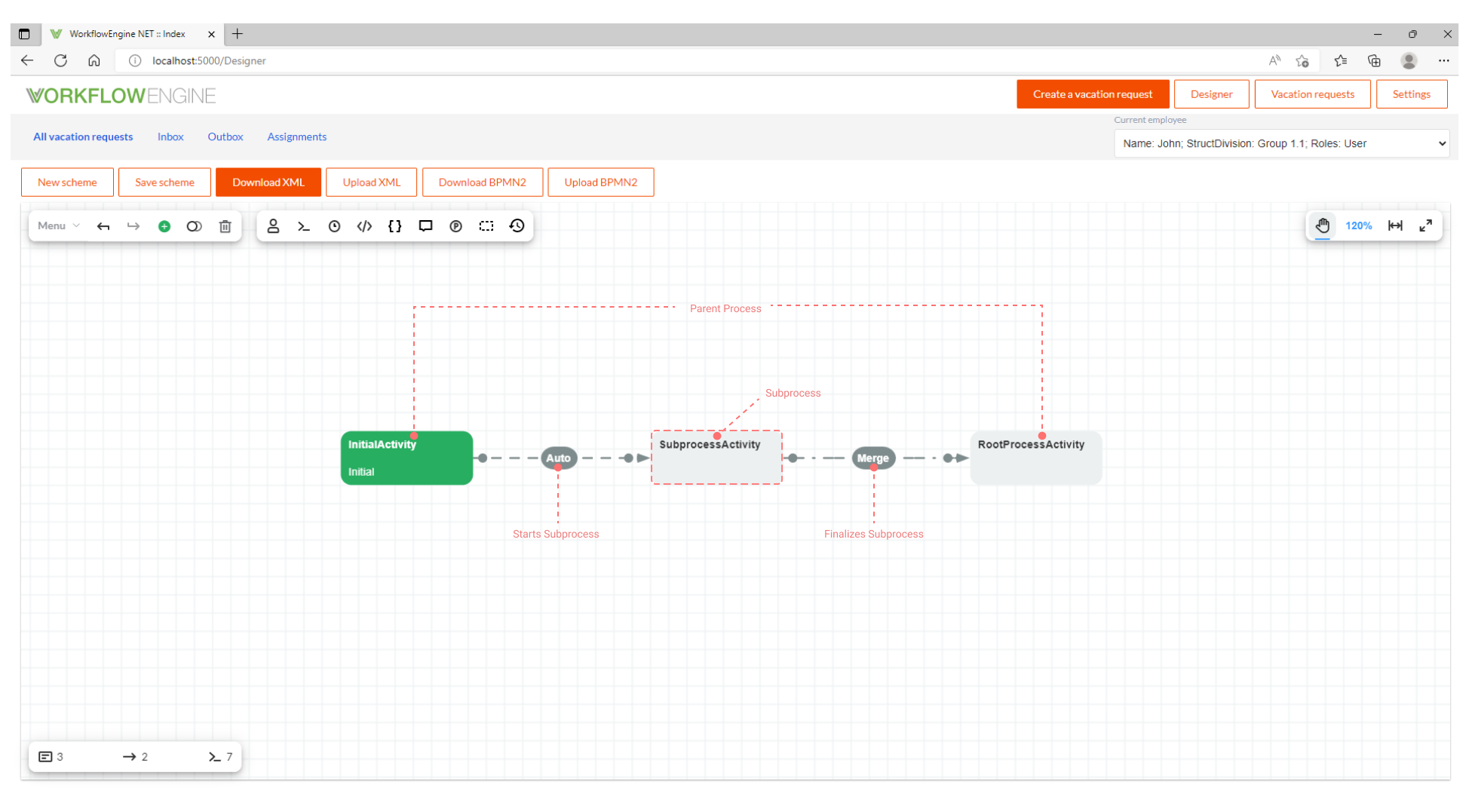 Thus, having at your disposal the root object of the ProcessInstancesTree class, you can receive any information about the subprocess tree.

Getting the List of Commands and Executing Commands with Subprocesses​ 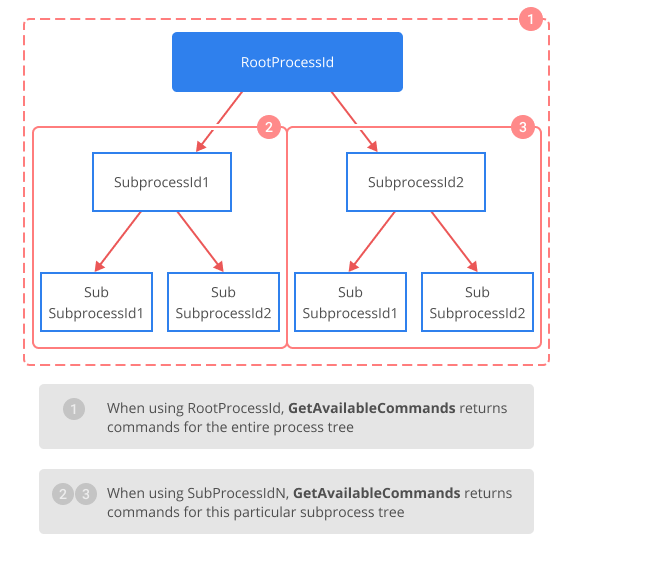 The WorkflowCommand object has the following properties that help to understand which subprocess the command is related to.

Utility Properties of the ProcessInstance class​

An object of the ProcessInstance type contains the properties that return the Ids of the root process and the parent process.

Also, when the subprocess is merged into the main process, then all of the subprocess parameters will be available (but only at the merge time) in the special collection:

Utility Methods for Merge with Computing of Transition​

In the case, when a subprocess is merged with computing the transition, two utility methods are available. They are similar to those connected via the Basic Plugin that we have considered above.

TreeSearchFilter contains the conditions for starting and traversing the subprocess tree to get the list of users who may execute the command. This method is most frequently used when working with the inbox.

It is possible to safely set and get the root process parameters from a subprocess, using the following methods of an object of the ProcessInstance type. 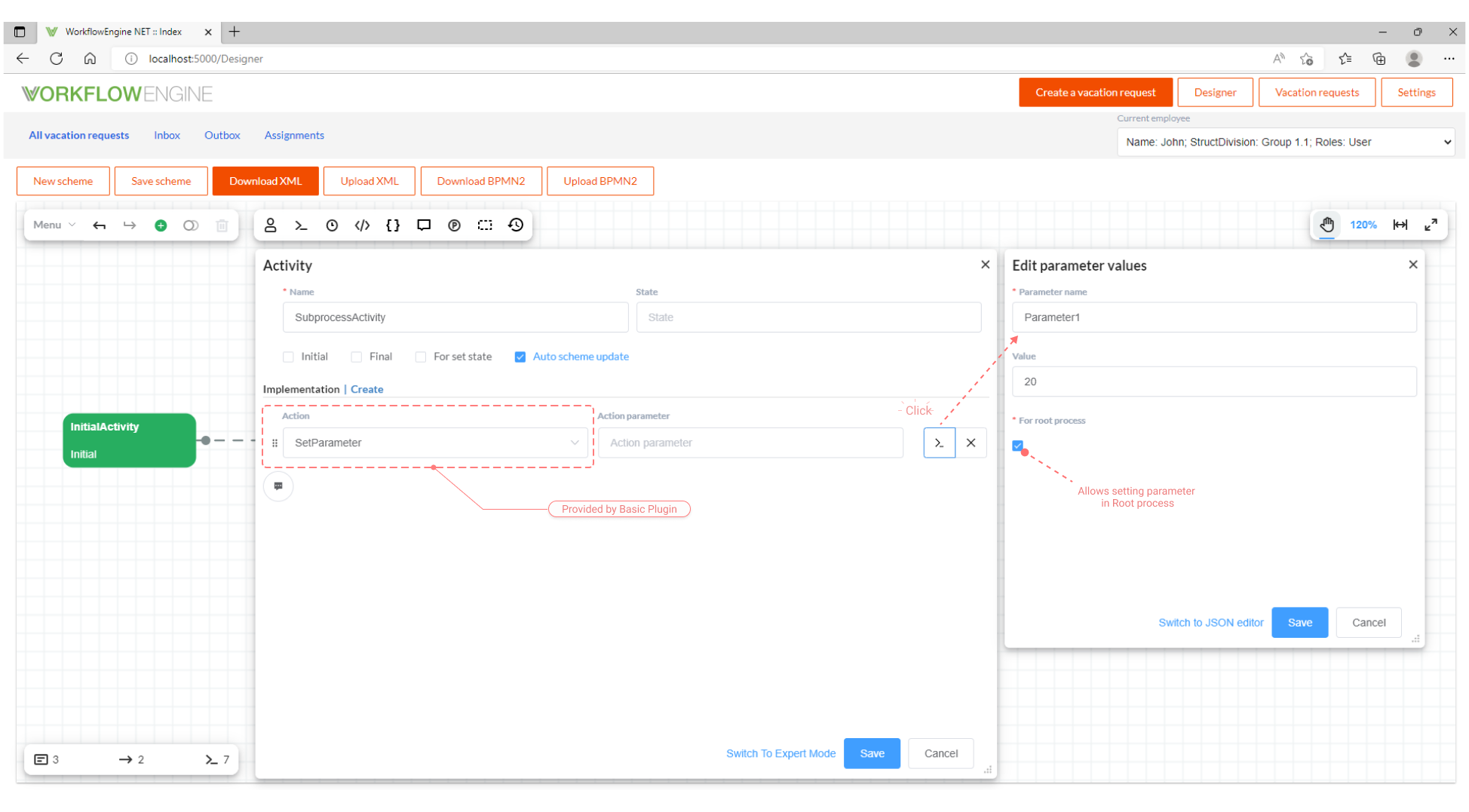